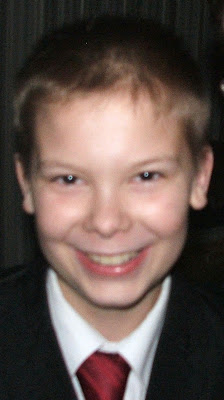 So, as my hubby and I were contemplating our next adventure into the wondrous world of dating bliss, it occurred to me to mention that our oldest child is now Exempt from all previous death threats. It's true! Seriously! As of October 2008, Dalen no longer has to worry or stress over his life with random sayings like, "Did you wanna die today?" Or "One less blonde in the world is only gonna hurt you." Or "I know, you're not stupid enough to say that in front of me, i know it--because I know you really didn't wanna die."

So, the reason for this wonderful release from the ominous cloud of death that previously hung over his head, you say? Well, the answer is simple. It's all a matter of math. He's finally old enough to babysit the other children. He's too valuable to Mark and I, see what I mean? We need escape. Dalen can live. I think that's a fair trade actually. Of course, he better watch it--once Bailey hits babysitting age--but until then... It's been too many years creating this instant babysitter, all death threats are currently on hold. Dalen CAN LIVE!!! Hmm.. now what movie did Mark and I want to see next? Muhahaha!