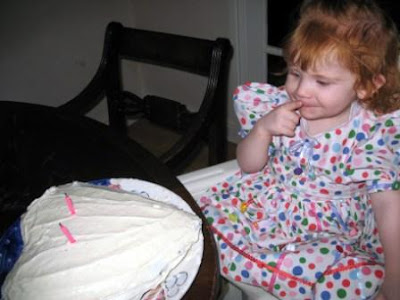 For those of you who have not had a two year old in the house for a while, or have never experienced the great curiosity of a two year old... let me give you a little tip.

NEVER EVER leave a perfectly beautified and heavily frosted heart shaped cake on the counter while a two year old is in the house. Don't do it. You may think that the kitchen counter would be the perfect place to sit an unsuspecting cake, but i warn you now... it is NOT!

Find somewhere else to stash your prized dessert. You know, like the top of the refrigerator (Doesn't matter if there's cupboards up there. Trust me, it'll be an easier fate than what a two year old will do to the cake.) Or possibly some sort of old ice chest that locks and can be stored up on that third shelf in the garage. Somewhere, anywhere other than where the two year old has followed you and seen where you're putting the cake... or alas, that too will be found and you will have to start all over creating another beautified masterpiece.

Your best possible course of action is to, of course, distract the said two year old from watching where you place the cake. This may involve a bit of improv, and cleverness on your part and require nothing short of a Teletubbies DVD, a whole slew of hollering children stampeding round and round as if in a makeshift marching band, duct tape, a high chair and a bouncing ball. If you do not have those items... well, then good luck and may the force be with you.

(Picture is for reenactment purposes only. No two year olds were threatened by death, tormented, duct taped, or received damage to their ear canals during the making of this blog. However, the funeral is at nine for the cake. *sigh* such a pretty, good little cake too.)
Posted by Jenni James at 4:44 AM