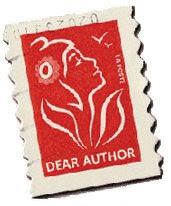 Okay so many of you already know this... and even more of you have already stumbled across my query letter that is posted around the net in various places. Yes, I'm very open about my publishing process, so if there's anything you would like to know--anything at all--ask me and I'll answer as best I can.

A little while ago, I had a few requests to post my REAL query letter. The one that got me my totally awesome agent Kirsten Manges back in August. (Along with 6 other very interested agents--that I had to turn down.)

For those of you who have no idea what i'm talking about, don't worry, you're not alone. I had never even heard of a query letter until last April--and then I freaked out trying to decide how to write one. So here's the deal. After you write your novel (COMPLETE it. Step One) and then you give it to all of your friends to read for critiques and edits (EDIT it. Step Two) then you start searching for literary agents online and write out your query letter to see if they're interested in your book. (Query it. Step three) Once you've come up with the perfect query letter that sounds like you, makes your book exciting, and convinces the agent to ask for more--This is Not easy btw--You begin to query.
Now, I tweaked this letter about 6 or 7 times during the 8 weeks I sent out 50 queries to 50 different agents... by the time I tweaked it for the last time, my "thanks but no thanks" rejections became..."Ooh, I love the sound of this. Send me more."
Once the agents started getting interested I knew I had hit query perfection! LOL! Yes, I was a happy girl. And amazingly agented just 2 1/2 weeks after the final query was made.
So here it is. My final draft. Hope this helps.
Dear Ms. Kirsten Manges,
In a world where drama is everything, Chloe Elizabeth Hart has found she cannot abide the conceited antics of the popular crowd. –Or more importantly, one very annoying self-possessed guy, Taylor Anderson, who is determined to make her the president of his fan club! As if! Every girl in the whole city of Farmington, New Mexico is in love with Taylor, but he seems to be only interested in her.

The reader laughs, simmers and loves with Chloe in the romantic high school roller coaster ride called Pride and Popularity. Chloe follows the same lines and battlefields drawn out by Jane Austen’s Pride and Prejudice two hundred years ago, with a much more modern twist:

~Instead of attending balls…its parties, dates and high school dances.
~Instead of letters…it’s passed notes, emails and cell phone calls.
~And instead of marriage proposals…its boyfriends, prom and gorgeous dresses!

I am a professional children’s theater director/playwright and have written and produced three full length (3-act) plays for children/teens, Cinderella (2006), The Greatest Fairy tale EVER! (2007) and Snow White a Tale of Envy (2008). This is my first novel. With my background in professional theater I have spoken in many public speaking events and theater seminars.

Please, let me know if you are interested in reading more of the completed 63,500 word count YA manuscript. Until then, I will continue working on its Jane Austen sequel Persuaded, which is set in the same rural city as Pride and Popularity. Being part of the world wide fan base of Austenites who love rewrites/sequels, I hope to modernize and recreate all six of the beloved Austen novels for teens. –Which has never been done before! As a mother of six, my ultimate goal is to present tweens/teens with an alternative to the ever popular chick lit novel on the shelves today, with good clean characters and positive heroes to emulate.

NOTE: If the punctuation marks are off-kilter, it is due to my email program. The full manuscript has been edited by a second party. Below, I have included a brief synopsis and sample chapter.

Thank you, for your consideration and your time.
Sincerely,
Jenni James

(Then all my contact info: email, phone, addy)
Posted by Jenni James at 6:50 AM