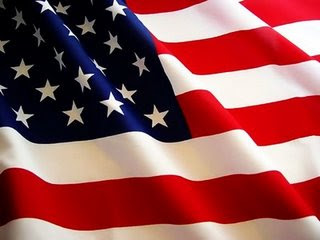 We're here! We're here! I can't believe it, but we've finally made it home! And even though I miss Europe like crazy, there's no place like home...

It's been so much fun getting to show the kids all of the American stuff they've never seen before like, stores, restaurants, vehicles, signs, MOUNTAINS! But their most favorite thing to see was the US Flag. My kids were so excited seeing the flag as we were driving on the Utah freeway, that they all immediately put their hands over their hearts and began to recite the pledge of allegiance. LOL!
Then as someone would see another flag, they'd quickly place their hands over their hearts and do it again, and again, and again... for every flag they saw. Until soon, they were saying the pledge so fast you couldn't even understand the words.
Finally Maralyn, my 7 yr old said--as each brother pointed out a different flag at the same time-- "Sheez! There's too many! I'm telling you, Utah is is just too American for me. How are we supposed to do this all day long?"
They all agreed that maybe saying the pledge for every flag was just a bit much.
I for one was very grateful they stopped! LOL!
It's good to be home! And back! I'll be checking your blogs on and off all day, I can't wait to catch up with you all!
Love,
Jenni and the whole James Gang!
Posted by Jenni James at 8:51 AM