Key of Kilenya is AMAZING! 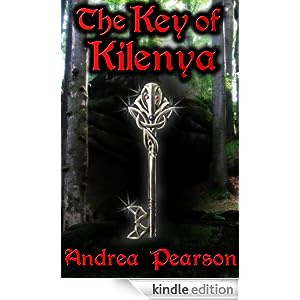 My 14 year old son and I LOVED this book!  We both found Key of Kilenya gripping from the start.  Dalen, especially couldn't stop once he'd started.  It was hilarious to watch him do his chores with one hand, while reading from the kindle with the other.  He'd even walk slowly up and down the stairs while reading it.  Any book that he finds that fascinating deserves a five star review.

You will be blown away through the unique twists and turns of Andrea Pearson's new world.  Where fierce unimaginable creatures roam and excitement and adventure await at every turn.  Dalen says, "It's clearly one of the most addicting books I've ever read, now where's the sequel?  There better be a sequel!"  Yes, he's already offered to be her beta reader.  Lol!  Isn't he sweet?

No, really.  We were both amazed at the talent and ingenuity Andrea possesses.

I personally found Andrea's descriptive imagery to have just the right touch.  Engrossing and magical, yet, not too bogged down.  We had just enough facts to create the world within our own minds... beautiful and just enough action to keep us on the edge of our seats... or in Dalen's case, the kindle at the edge of our fingertips!

For a debut novel, I'm impressed.  If you'd like a great read this summer, or know of a boy who seems a little bored.  Order it and pass over your kindle!  You'll be glad you did. :)

We didn't want to give too much away, since neither of us knew that much about the book when we first got it.  And we liked the fact that it was completely surprising.  So instead of accidentally spoiling the fun for you,  we're going to leave you with this--the back blurb:

When two vicious wolves chase fourteen-year-old Jacob Clark down a path from our world into another, his life is forever changed. He has no idea they have been sent by the Lorkon—evil, immortal beings who are jealous of powers he doesn’t know he possesses—powers they desire to control.

The inhabitants of the new world desperately need Jacob's help in recovering a magical key that was stolen by the Lorkon and is somehow linked to him. If he helps them, his life will be at risk. But if he chooses not to help them, both our world and theirs will be in danger. The Lorkon will stop at nothing to unleash the power of the key—and Jacob's special abilities.

Definitely an upcoming author to watch out for.  As I've said, anything that keeps my son that addicted deserves a 5 star review!
Posted by Jenni James at 3:22 AM