After the Trial of Your Faith... 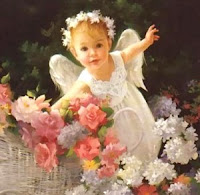 So, on December 2nd (2 1/2 months ago) another author and I were on our way to a book signing in Logan, Utah.  We never made it.  I was driving, hit a patch of black ice and spun into oncoming traffic on the highway and was struck by a Semi.  It was the scariest thing that has ever happened to me.  Because you don't drive your car and kill your friend.  You don't.  It's against the law.
The Semi struck her side of the car.  I thought she was dead.  After a series of uncontrollable spins and more sliding and crunching and all sorts of awfulness where we managed to find our way facing back the way we were originally going, I realized after frantically calling to her--

My friend was not dead.  She was dazed and barely speaking, but thankfully not dead.

Since that night, I have thanked my Heavenly Father repeatedly for saving us both.  We're still hurt--mostly dislocated ribs, back and neck issues... but we're okay.  And I have collapsed on my knees in great sobs thanking God and trying to deal with the pain and scariness and terror of that night.  Reliving it is super hard.  And it seems to be my favorite thing to do.  Relive every millisecond.  *sigh*

But it is good.  Because it's taught me to be calm.  It's brought me closer to God and to my friend.  And it's taught me that sometimes waiting is the best thing in the world.

Last month on this day, I lost the baby I was carrying.  I didn't even know I was carrying her, until a week before then.  But I could no longer ignore the kicks and bumps and squirms and rolling, weight gain...  I could no longer pass it off as weird pain issues.  Lol!  It was definitely a growing, thriving, happy baby.  And I was ecstatic.  And scared, due to injuries from the crash, and all the x-rays I'd already put her small body through.  I celebrated her life for 8 days before I lost her.  She was in her second trimester.

But it was good.  I cried and let her go and allowed myself the promise of having a second chance at raising her and have an 8th baby.  I needed to heal.  I needed to be able to hold the precious children I have now, before trying to carry one with my weakened back and ribs.  So, I remained calm.  And thanked my Heavenly Father again for saving me and my friend, and just breathed.

Today... Today I am not calm.  I feel like I have harmed her little body all over again, as well as my friend's. I feel like the worst driver in the world.  I hate black ice.  It is too scary for words.