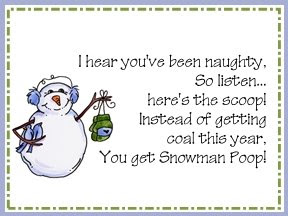 So I was typing this on Ang's blog--Hi Ang! (Thanks for the new blog award) Since she was asking for Christmas Stories... when I realized I could totally post this here! Heehehe! So I stopped mid typing and zoomed over here! I know... I'm awful, right?

Anyway, so my family is full of practical jokers... we just are. We love to laugh and tease each other and then laugh about it. It's great though, because we've all grown up to be pretty good sports about stuff! hahaha! So when we were younger one year for christmas my mom thought it would be really funny to give us all the above tag with a bag of marshmellows and have Santa hide our stockings! Hahahaha! So when we came into the family room, we were all surprised to find these bags. But some of us were more clever than others some of us ei: ME thought to flip the tag over and read something like: Santa left your sock in the dryer. Or go find your sock it's in the oven. LOL! Yes, I know random spots, right? but this IS my mom we're talking about and she's never been sane. EVER. heheheh!

So I have this one brother... he's a middle child... so no offense to middleans out there... just know.. he's cute and all, he's just got issues! LOL! If you've been around this blog awhile.. you'll remember him from my SPIDERS! story that won the halloween contest. Anyway, he didn't catch on right away that his sock was somewhere else. Instead, he just sat on the couch--in all of his pouty 15 year old glory and sulked--until he noticed one by one the rest of us running to get our stuff. THEN! He flipped his card over and read:

Trent--Your sock is in the roaster. Which really meant the large roaster oven my mom has next to the stove. But what Trenton read was: Your sock is in the ROOSTER. LOL! He spent twenty minutes running around the house yelling, "Where's the rooster? Where's the rooster? I didn't know we had a rooster? Sheez! Come on, someone please! Help me find the rooster!" until one of us took pity on him and read his card. --Not mom though, she was laughing too hard. She still couldn't speak an hour later when she was describing it on the phone to HER dad. Yeah, Trent sulked a lot that day. But, hey! At least Santa didn't stuff his sock into a rooster. Now that would've been a mess! LOL!
Posted by Jenni James at 2:22 PM